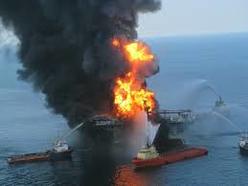 WASHINGTON - A federal judge has ruled that British energy giant BP was "grossly negligent" in its actions leading up to the massive 2010 explosion on the Deepwater Horizon drilling rig and oil well blowout in the Gulf of Mexico in which 11 people died.

The disaster led to the biggest oil spill in US history.

U.S. District Judge Carl Barbier's in his ruling Thursday in New Orleans stated, "BP committed a series of negligent acts or omissions that resulted in the discharge of oil, which together amount to gross negligence and willful misconduct under the Clean Water Act (CWA).

"This is an additional and alternative grounds for finding BP's conduct amounted to gross negligence and willful misconduct."

The ruling means that BP could end up paying up to $18 billion in fines under the CWA for its role in the disaster.

Under the CWA, a company involved in an oil spill that is "grossly negligent" can pay up to $4,300 per barrel spilled. The amount can be lowered by the judge.

Barbier's in his ruling about the level of responsibility of all the companies involved in the project disaster stated that "BP's conduct was reckless. (Drilling rig owner) Transocean's conduct was negligent. (Cement firm) Halliburton's conduct was also negligent."

Barbier will ultimately set the fines based on the degree of negligence and a determination of how many barrels of oil were spilled, on which there is some dispute.

BP says 2.5 million barrels of oil were spilled during 87 days the spill lasted, while the judge says 4.2 million.

The British firm is already paying billions of dollars in criminal fines and in payouts to people harmed by the spill.

In 2012, BP accepted criminal responsibility for the disaster including 11 counts of manslaughter and one felony count of lying to Congress and paid $4.5 billion in fines to the Department of Justice.

Further, BP has also settled with various plaintiffs who had been harmed by the spill including individuals, businesses, fishermen, and hotels. Those costs are estimated at $9.2 billion. The energy giant also agreed to put $20 billlion into a trust to pay to businesses and individuals.

It is not yet clear whether the new ruling will open up additional claims.

In all, BP has put aside $42.5 billion to pay for the spill including $3.5 billion for any civil penalties. .

Earlier this week Halliburton, the company in charge of sealing the completed Deepwater Horizon well that spewed millions of gallons of oil into the Gulf, agreed to pay $1.1 billion to settle claims arising from its negligence.

During the 87 days when efforts were on to cap the underwater gushing well, the oil ended up fouling beaches and harming wildlife around the region.

Barbier's ruling has apportioned 67 percent of the blame on BP, which means its liability for the damage will proportionately go up, while fixing 30 percent responsibility on Transocean, and 3 percent on Halliburton.

BP said it strongly disagrees with the decision issued by the court and will appeal the ruling, according to an emailed statement.

"BP believes that the finding that it was grossly negligent with respect to the accident and that its activities at the Macondo well amounted to willful misconduct is not supported by the evidence at trial," BP stated.

"The law is clear that proving gross negligence is a very high bar that was not met in this case."

The latest in a long string of court cases and legal wrangling over the spill, Barbier will now hold a penalty phase to decide how much the company will pay.

According to court documents, Clean Water Act civil penalties can total up to $1,100 per barrel spilled in the absence of "gross negligence or willful misconduct."

Expectations are that BP may be asked to pay maximum penalty with Barbier having ruled that the 2010 oil spill was the result of negligence.

BP's stock slid 6 percent after the ruling was announced.

Musk moves home to Texas, after locating companies throughout state

AUSTIN, Texas: Aviation and aerospace company SpaceX is expanding its presence to align with global demand by setting up a ...

Volvo said all car purchases to be only online

GOTHENBURG, Sweden: Volvo targets to only manufacture electric cars by 2030 by significantly increasing the size of its U.S. South ...

CUPERTINO, California: Apple announced on Monday that all 270 of its store locations in the U.S. have officially opened for ...

BENGALORE, India: The Covid vaccine manufactured by Bharat Biotech has been found to be 81 percent effective, in an analysis ...

Yemen's Houthi rebels have carried out missile and drone strikes on a Saudi military base and an oil facility, expanding ...

BERLIN, Germany: In a change of policy, Germany has announced it will begin vaccinating those over 65 years-old, while recommending ...

WASHINGTON D.C.: Compromising with moderates, President Joe Biden and Democrats agreed to tighten the requirements for those eligible to receive ...

375 Michigan students locked out of school due to Covid testing

ANN ARBOR, Michigan: Some 375 University of Michigan students have been banned from entering school buildings because they have not ...

Macron says Paris not locked down for weekend

PARIS, France: The French government will not require residents of the Paris region to be locked down this weekend. However, ...

LARISSA, Greece: Central Greece was struck by a magnitude 6.0 earthquake on Wednesday, which was also felt in nearby Albania ...