Mural With Infamous Trump Quotes at Issue in New Orleans 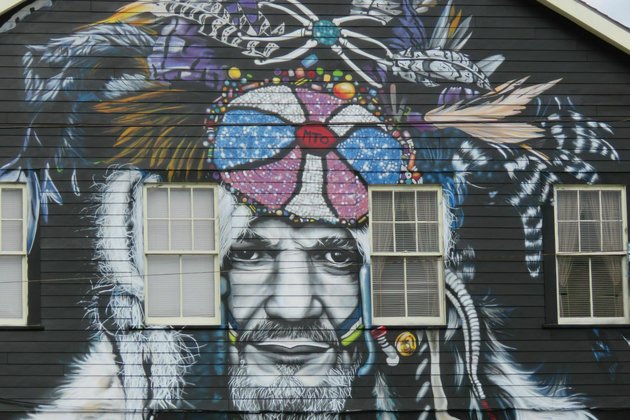 NEW ORLEANS - A federal judge scheduled a hearing Monday on whether New Orleans regulations for murals violate the free speech of a landowner whose fence painting features infamous Donald Trump quotes from a 2005 "Access Hollywood" recording.

In large capital letters with cartoons replacing four words, the mural transcribes part of the future president's recorded conversation, including a comment about a woman's breasts and his boast about grabbing women's genitals. It starts with, "I moved on her like a dog," with a cartoon dog in place of the word.

Landowner Neal Morris has asked Judge Martin Feldman to rule without trial, saying the regulations are clearly unconstitutional and the city should be barred from enforcing them. Feldman scheduled a hearing for 2 p.m., July 8, 2019.

In its response, the city said courts have long approved reasonable restrictions on the manner in which free speech can be exercised. Permits are needed to be sure that a mural is not a commercial sign or graffiti, it said. To obtain a permit, applicants must submit sketches of the work they plan to display.

But in a lawsuit, American Civil Liberties Union attorneys representing Morris argue that the permits amount to "content-based restriction on speech" because the applicant must pay the city and get the artwork approved in advance. They also say the city isn't clear about what would be forbidden. For instance, they wrote, it might forbid a tribute to the city that includes "various tropes of the city's culture, including beignets, a Saints helmet ... and a bottle of Tabasco."

The city's lawyers included a mockup of the possible mural described by the ACLU, saying it "clearly falls within the ... definition of a mural" because it would not be advertising or promoting "a commercial or economic transaction." On the next page, it had a mockup of a Tabasco bottle with the legend "Some like it hot." That, it said, "would be viewed as an advertisement for a product that is readily available for purchase."

A third mockup showed a bottle of nonbranded hot sauce and the same words. The attorneys said that would be art but, without a mural permit, "could easily be mistaken by a citizen or law enforcement officer as graffiti."

After filing his lawsuit, Morris created the NOLA Mural Project, which matched artists who wanted to paint murals with nearly two dozen building owners who wanted murals. All were painted without permits.

The city revised its mural rules in June, cutting the cost from $500 to $50, and moving approval from the City Planning Commission to the Department of Safety and Permits - but still requiring sketches for approval, NOLA.com and The Times-Picayune reported.

NEW YORK, New York - Stocks in the United States, and across the world were in demand again on Tuesday, ...

Chinese solid waste imports down by nearly 50% this year

BEIJING, June 2 (Xinhua) -- China is now moving closer and vows to achieve its goal of halting all imports ...

CO CORK, Ireland - A U.S. manufacturer of essential oils, health and wellness products is developing a manufacturing plant near ...

Dubai getting back to business after lengthy break

DUBAI, UAE - Malls throughout Dubai are slowly building their business after being dormant for some weeks due to the ...

News Corp's closing of its community and regional papers, with few remaining and others online-only, cancels centuries of beliefs about ...

Officials say that seven civilians have been killed and six others wounded in a roadside bomb attack in northern Afghanistan.The ...

Tensions between U.S. black communities and police go back centuries

Outrage over racial profiling and the killing of African Americans by police officer ...

WASHINGTON, DC - Under siege in the White House, President Donald Trump is aggravating America's latest racial anguish in a ...