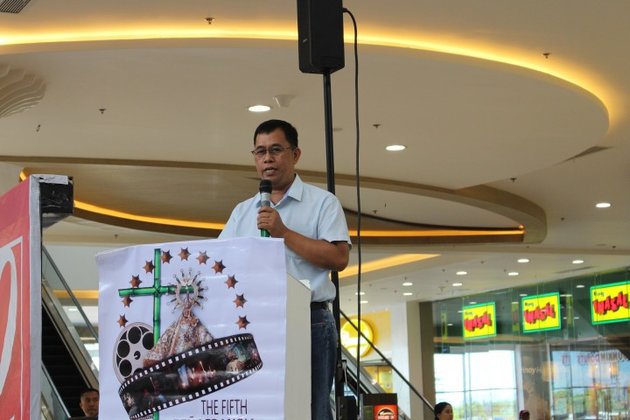 NAGA CITY, Oct. 8 (PIA) - City Mayor Nelson Legacion expressed his full support to the 5th Penafrancia Short Film Festival as he acknowledged the young film makers and their enthusiasm to be a part of the great devotion to Our Lady of Penafrancia thru the production of short films.

Naga City Mayor Nelson Legacion graces the presentation of the entries to the 5th Penafrancia Short Film Festival (PSFF) where he gave his full support to the festival, Oct. 5, 2019 at Robinsons Place Naga. (JRM-PIA5/Camarines Sur)

"My presence here is to manifest and show that the city fully supports the 5th Penafrancia Film Festival, its organizers, the participants in all their undertakings, as we are offering this to our beloved Ina. We hope that through this, we will be closer to her. Rest assured of the full support of the city govenment of Naga in this undertaking," Legacion said during the press presentation of the film fest's entries Saturday, Oct. 5 at the Robinsons Place, here.

The chief executive added that the film fest, initiated by the Archdiocese of Caceres thru the Caceres Commission on Communications (CCCom), in coordination with the Department of Education, is a great avenue where the young, talented students can showcase their craft, skills, innovativeness and imagination.

CCCom Chairperson Fr. Louie Occiano explained that the Penafrancia film festival started off in 2013 as it endeavours to give a platform to all aspiring participants, particularly student film makers, to showcase their talents. The organizers also wish to promote the devotion to Our Lady of Penafrancia by using the new media as an effective tool to reach out to the youth and all devotees worldwide.

This year's theme is "The YOUTH: Beloved, Gifted, Empowered through INA, Our Lady of Penafrancia."

For the criteria, 20% will go to adherence to the theme, 15% for originality and creativity, 15% for the composition and coherence of audio-video, 25% for the quality of editing and cinematography and another 15% for the over-all performance of cast or acting, for a total of 100%.

The final entries will be showcased in various schools and parishes all over the Bicol region through a film roadshow before the final awarding slated on Dec. 7. (LSMacatangay-PIAV/Camarines Sur)