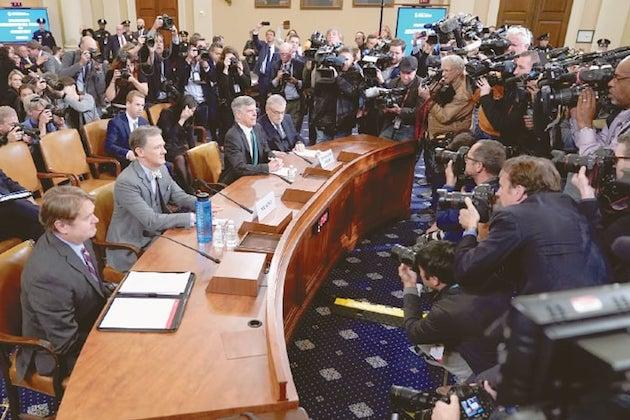 WASHINGTON, DC - Historic impeachment hearings targeting U.S. President Donald Trump opened on Wednesday in Washington, with lawmakers faced with the question of whether he abused his office to help himself politically.

Two State Department officials - William Taylor, the current top American diplomat in Ukraine, and George Kent, who oversees Ukraine affairs - were the first witnesses before the House Intelligence Committee in the nationally televised hearings, only the fourth time in U.S. history that an impeachment inquiry has been launched against an American leader.

More than a dozen current and former diplomatic and national security officials, including Taylor and Kent, laid out the case in private testimony that Trump temporarily withheld $391 million in military aid to Ukraine to fight pro-Russian separatists in the eastern part of the country - unless Ukrainian President Volodymyr Zelenskiy publicly promised to open investigations of one of Trump's chief 2020 Democratic challengers, former Vice President Joe Biden, his son Hunter Biden's work at a Ukrainian natural gas company and a debunked theory that Ukraine worked to undermine Trump's 2016 election campaign.

In the hours ahead of the testimony, Trump railed against the Democratic-led impeachment effort that threatens his three-year presidency, quoting one supporter as noting that he eventually released the U.S. assistance to Kyiv in September without the investigations of the Bidens being opened.

Trump said the witnesses expected to testify about his actions involving Ukraine are "NEVER TRUMPERS!" However, almost uniformly, they are career diplomats and national security officials who have worked for both Republican and Democratic administrations or in the case of one key witness next week, Gordon Sondland, a million-dollar Trump political donor and now the ambassador to the European Union, been appointed by him.

Trump has described his late July call with Zelenskiy as "perfect" and called on Americans to "READ THE TRANSCRIPT!"

But the key element of the impeachment case against Trump is in the rough transcript of the call released by the White House, with the U.S. leader asking Zelenskiy "to do us a favor," to open the investigations of the Bidens. It is a violation of U.S. campaign finance law to seek assistance from a foreign government to help in a U.S. political campaign.

Trump's supporters say that Trump never specifically mentioned a quid pro quo in the call - the military aid in exchange for the politically tinged probes that would help Trump as he seeks re-election in November 2020.

House Intelligence Committee Chairman Adam Schiff said Taylor, Kent and a third witness set to testify Friday, Marie Yovanovitch, a former U.S. ambassador to Kyiv, "bring decades of dedicated and exemplary service to our nation, and I believe it is vitally important that the American people and all members of Congress hear in their own words what they experienced and witnessed."

But Republicans, according to memos circulating Tuesday to party members ahead of the hearings, plan to sharply question Taylor's and Kent's understanding of Trump's intent in dealing with Ukraine and insist that Trump had a "deep-seated, genuine and reasonable skepticism" about corruption in Ukraine and that his withholding aid was "entirely reasonable."

A Republican strategy memo circulating at the Capitol building outlined four defenses for Trump: that the July 25 call "shows no conditionality or evidence of pressure," that both Zelenskiy and Trump have subsequently said there was no pressure during the call, that Kyiv was not aware at the time, only later, that U.S. military aid was being withheld, and that Trump eventually released the military aid without the investigations of the Bidens being opened.

"These four key points undercut the Democrat impeachment narrative that President Trump leveraged U.S. security assistance and a presidential meeting (with Zelenskiy at the White House) to force Ukraine to investigate the president's political rivals," the memo said.

Trump continued to scoff at the impeachment hearings against him, only the fourth such occurrence in the 243-year history of the U.S. In the previous three impeachment efforts targeting U.S. leaders, two presidents (Andrew Johnson in the mid-19th century and Bill Clinton two decades ago) were impeached but acquitted in Senate trials, while a third president, Richard Nixon, resigned ahead of all-but-certain impeachment in the 1970s.

Trump, on Twitter, called the effort targeting him "A total Impeachment Scam by the Do Nothing Democrats!"

"Why is such a focus put on 2nd and 3rd hand witnesses, many of whom are Never Trumpers, or whose lawyers are Never Trumpers, when all you have to do is read the phone call (transcript) with the Ukrainian President and see first hand?" Trump said in another tweet.

Schiff told the 435 members of the House of Representatives that the nationally televised hearings "are intended to bring the facts to light for the American people."

Republicans claimed in their memo defending Trump, "Democrats want to impeach President Trump because unelected and anonymous bureaucrats disagreed with the president's decisions and were discomforted by his telephone call with President Zelenskiy. The president works for the American people. And President Trump is doing what Americans elected him to do."

U.S. stocks on a roll, Nasdaq at new record high

NEW YORK, New York - Despite the number of Covid-19 cases in the United States topping 3 million on Wednesday, ...

In the past month, there's been an outpouring of support for Black Lives Matter from America's largest corporations.You might have ...

NEW YORK, New York - Stocks in Asia were mostly on Wednesday, in line with the sell-off globally a day ...

Vouchers instead of refunds in case of canceled flights disappoint

One of the lessons the current coronavirus pandemic has taught us is that we depend on electronic devices more than ...

TEHRAN (Tasnim) - China on Wednesday defended the World Health Organization and lashed out at the US decision to withdraw ...

Bullying of International court and Bank of England laid bare

On January 9, 2020, Ambassador Karen Pierce-the United Kingdom's permanent representative to the United Nations-spoke at a meeting on the ...

Countries across the globe re-thinking reopening as coronavirus surges

As coronavirus cases around the world approach 11.5 million, governments are struggling with how to reopen their economies, leading some ...

North Dakota pipeline supported by Trump ordered to be closed

A U.S. federal judge ruled Monday that a controversial pipeline that runs through Native American lands in North Dakota be ...