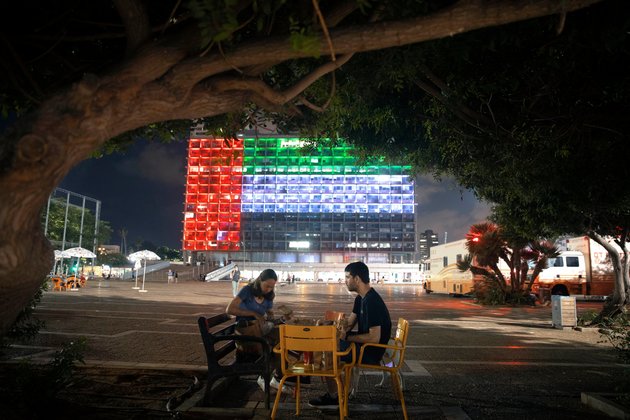 Trump is calling the agreement the "Abraham Accord" after the father of three monotheistic religions founded in the Middle East - Christianity, Islam and Judaism. It is only the third peace deal Israel has made with an Arab nation since Israel became an independent state in 1948.

"Now that the ice has been broken, I expect more Arab and Muslim countries will follow the United Arab Emirates' lead," Trump said, during an Oval Office announcement where he was surrounded by members of his administration who helped broker the deal.

Emirati Muslims can now pray in the historic Al-Aqsa Mosque in Jerusalem, the third holiest site in Islam, Trump added.

Sorry, but your browser cannot support embedded video of this type, you can download this video to view it offline.

Netanyahu had warm words for his newest diplomatic partner.

"And to the people of Abu Dhabi and its leader Crown Prince Mohammed bin Zayed, I say, 'Salam Alaikum, Shalom Aleichem. Peace onto thee. Peace onto all of us,'" he said.

Officials in the Emirati capital, Abu Dhabi, were more circumspect.

"Is it perfect? Nothing is perfect in a very difficult region," said senior UAE official Anwar Gargash. "But I think we used our political chips right."

The agreement at least suspends Israeli plans to annex large parts of the West Bank, which Palestinians want as part of a future state.

Netanyahu says annexation plans are on "temporary hold" while Gargash said the agreement is a "death blow" to what he says was Israeli aggression.

Democratic presidential candidate Joe Biden, who opposes Israeli annexation plans, said, "The United Arab Emirates and Israel have pointed a path toward a more peaceful, stable Middle East," he said adding that a Biden administration will seek to build on this progress.

A spokesman for U.N. Secretary-General Antonio Guterres says Guterres "welcomes this agreement, hoping it will create an opportunity for Israeli and Palestinian leaders to re-engage in meaningful negotiations that will realize a two state-solution in line with relevant U.N. resolutions, international law and bilateral agreements."

Sorry, but your browser cannot support embedded video of this type, you can download this video to view it offline.

Palestinian President Mahmoud Abbas met with his senior aides late Thursday. His spokesman called the deal "treason" and urged the UAE to cancel the agreement. The spokesman urged other Arab countries not to follow suit "at the expense of Palestinian rights."

Abbas is recalling his ambassador to the UAE, the official Palestinian news agency said.

The UAE is the third Gulf Arab country to normalize relations with Israel, after Egypt and Jordan, and the first in the Gulf.

While Israel and the UAE have never fought a war and there was almost no chance of one breaking out, the UAE has always rejected closer ties with Israel because of lack of progress toward a Palestinian peace agreement.

But Middle East analysts say the UAE shares Israel's contempt for and distrust of Iran and its proxies and militant groups such Hamas.

SYDNEY, NSW, Australia - Stocks in Asia were generally stronger on Friday, at least in Japan and Australia."What we've seen ...

UK restaurants and pubs brace for fallout from new restrictions

Trump running into legal hurdles over attempt to ban TikTok

WASHINGTON, DC, September 25 (ANI/Sputnik): A U.S. federal judge has ordered the Trump administration to postpone its ban on downloads ...

Night of the Living Dead