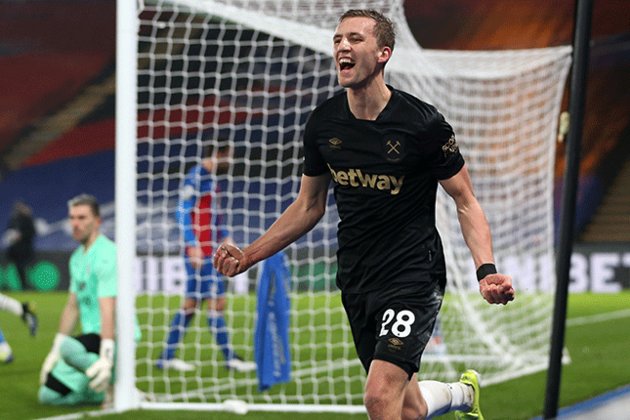 West Ham moved into the Premier League's top four as Tomas Soucek scored twice in a 3-2 win at Crystal Palace, while Leeds inflicted more misery on Newcastle with a 2-1 victory at St James' Park on Tuesday.

But the stronger mentality that David Moyes has lauded in West Ham this season showed as Soucek struck twice in 16 minutes to turn the game around.

Only Manchester United's Bruno Fernandes has scored more Premier League goals from midfield than the Czech since he joined from Slavia Prague a year ago.

Soucek powered home a header from close range from Michail Antonio's cross and then bundled home Aaron Cresswell's free-kick at the back post.

West Ham could have been out of sight by half-time as Antonio then twice struck the post.

A third goal was no more than the visitors deserved and it came 25 minutes from time when Craig Dawson headed in Jarrod Bowen's corner.

Michy Batshuayi pulled a goal back with virtually the last kick of the game but it was too little, too late for Palace.

A sixth consecutive win in all competitions takes Moyes's men above Liverpool in the table and Jurgen Klopp's struggling Reds will be wary of their trip to the London Stadium on Sunday.

At the other end of the table, Newcastle's dreadful form continued as their winless run stretched to 11 games to pile more pressure on beleaguered boss Steve Bruce.

The Magpies have a seven-point cushion over the bottom three, but have now played two games more than Fulham in 18th.

Leeds had been on a poor run themselves, but secured their first win of 2021 to move 14 points clear of the drop zone in 12th.

Miguel Almiron levelled with Newcastle's first goal for five games early in the second half, but parity lasted only four minutes before Jack Harrison's sensational finish with the outside of his left foot claimed all three points for the visitors.

McKesson to have 4 vaccine distribution centers for one-shot vaccine

WASHINGTON D.C.: As preparations are underway to begin shipping Johnson and Johnson's COVID-19 vaccines this week, reports have been released ...

The winter storms that swept across the U.S., particularly Texas, upending the energy market and knocking out power for millions ...

WASHINGTON D.C.: The U.S. Justice Department has announced it will appeal a court ruling that the federal prohibition on evictions ...

No one hurt in Sunday's California quake

SAN FRANCISCO, CA: Small earthquakes reaching magnitude 3.7 were felt along California's Central Coast after midnight on Sunday, according to ...

WASHINGTON DC: Speaking to reporters on Sunday, Dr. Anthony Fauci said he would not hesitate to be inoculated with the ...