Hurricane Ida Weakens into Tropical Storm but Remains a Threat 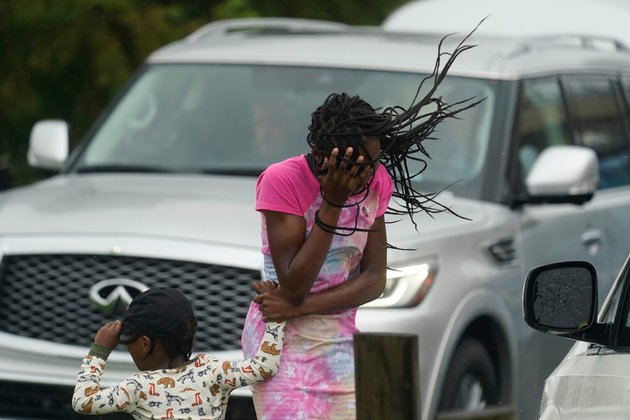 Hurricane Ida has been downgraded to a tropical storm, but it is still packing a powerful punch to New Orleans and nearby regions. The National Hurricane Center says Ida is responsible for "dangerous storm surge, damaging winds, and flash flooding" over southeastern Louisiana and southern Mississippi.

Entergy, the power company that provides electricity to New Orleans said in a statement Sunday: "As a result of Hurricane Ida's catastrophic intensity, all eight transmission lines that deliver power into the New Orleans area are currently out of service. . . Power will not be restored this evening, but we will continue work to remedy."

New Orleans is "completely without power," according to nola.com, and to fix the problem could take "days, but potentially longer" because one of the towers used in providing power to the city has fallen into the Mississippi River.

The power outage has also affected portions of Mississippi. Between Louisiana and Mississippi, more than a million customers are in the dark.

Early Monday, the New Orleans Emergency Communications Center posted on Twitter that the city's 911 emergency response system was not working. "At this time, 9-1-1 is experiencing technical difficulties. If you find yourself in an emergency, please go to your nearest fire station or approach your nearest officer. We will update you once this issue has been resolved."

The first death from Ida has been reported, the result of a fallen tree. Tropical Storm Ida is moving with maximum sustained winds of 95 kilometers per hour, the hurricane center said Monday.

A storm surge warning is in effect for Grand Isle, Louisiana, to the Alabama/Florida border.

A tropical storm warning is in effect for Grand Isle, Louisiana, to the Alabama/Florida border, including Lake Pontchartrain, Lake Maurepas, and Metropolitan New Orleans.

Cars drive through flood waters along route 90 as outer bands of Hurricane Ida arrive on Aug. 29, 2021, in Gulfport, Miss.

Sixteen years ago, August 29, 2005, Hurricane Katrina came ashore in Louisiana as a Category 3 storm. Katrina was blamed for 1,800 deaths, levee breaches and devastating flooding in New Orleans. The city's federal levee system has been improved since then, and Louisiana Governor John Bel Edwards predicted the levees would hold.

"Will it be tested? Yes. But it was built for this moment," he said.

Before Ida arrived, Edwards declared a state of emergency and said 5,000 National Guard troops were standing by along the coast for search and rescue efforts. In addition, 10,000 linemen were ready to respond to electrical outages once the storm passed.

Alabama Governor Kay Ivey also declared a state of emergency for coastal and western counties in the state.

New Orleans Mayor LaToya Cantrell ordered people who live outside the city's protective levee system to evacuate. And she urged those who remained in the city to hunker down.

"As soon the storm passes, we're going to put the country's full might behind the rescue and recovery," President Joe Biden said after a briefing at the headquarters of the Federal Emergency Management Agency in Washington.

The president said he had signed emergency declarations for Louisiana and Mississippi and has been in touch with the governors of those two states and Alabama.

The Gulf Coast region's hospitals now face a natural disaster as they are struggling with a surge in patients with COVID-19, the disease caused by the coronavirus, due to the highly contagious delta variant. "COVID has certainly added a challenge to this storm," Mike Hulefeld, executive vice president and chief operating officer of Ochsner Health, told the Associated Press.

Edwards said about 2,500 people are being treated for COVID-19 in the state's hospitals as the hurricane passes through.

Since the start of the pandemic, Louisiana has had 679,796 confirmed cases of COVID-19 and 12,359 deaths, according to the Johns Hopkins Coronavirus Resource Center. Its vaccine tracker says just 41% of the state's nearly 4.7 million population are vaccinated.

"Once again we find ourselves dealing with a natural disaster in the midst of a pandemic," Jennifer Avegno, the top health official for New Orleans, told the AP.

Some information for this report came from The Associated Press and Reuters.

New York City, New York: The largest musicals on Broadway returned on this week, after the COVID-19 pandemic forced them ...

BRASILIA, Brazil: Brazil's Agriculture Ministry announced that beef imports from some Brazilian meatpackers were suspended by Saudi Arabia after the ...

Majority of Japanese companies say business to recover in 2021

TOKYO, Japan: A survey by Reuters found that most Japanese companies believe the recovery of the country's economy has reached ...

NEW YORK, New York - U.S. stocks tumbled on Friday while the U.S. dollar rallied."It was a volatile week and ...

MOUNTAIN VIEW, California: California-based Intuit, known for its small-business accounting and DIY tax-filing software, including TurboTax and QuickBooks, announced that ...

VILNIUS, Lithuania: Lithuania's government said work on the first section of a fence along its 420-mile border with Belarus, which ...

UK budget will not include funds for Scotland-Northern Ireland tunnel

LONDON, England: A proposed 21-mile undersea tunnel to link Scotland and Northern Ireland will not be funded, according to British ...

SEOUL, South Korea: North Korea successfully tested a new long-range cruise missile, which is thought by analysts to potentially be ...

Washington's quasi-official court stenographer, Bob Woodward, has just published another "insider" DC account, which he co-authored with the journalist and ...

INDIANAPOLIS, Indiana: Hospitals in Indiana are still reeling from the recent spurt in new Delta Covid cases across the state.According ...

Next Norway prime minster a wealthy leader of Labor Party

OSLO, Norway: The man expected to become the next prime minister of Norway, 61-year-old Jonas Gahr Stoere, was born into ...

Chimes at Midnight (aka Falstaff)