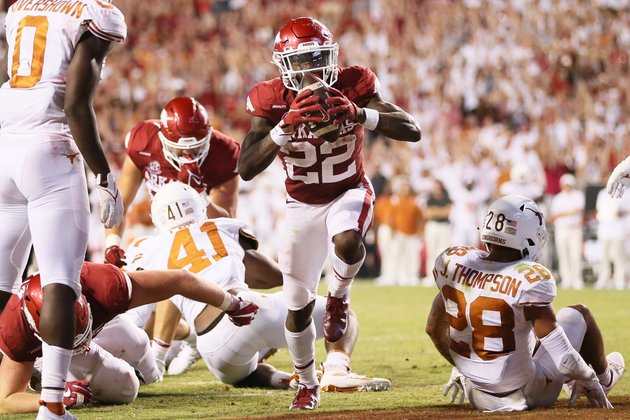 No. 20 Arkansas welcomes Georgia Southern this week while getting familiar with its surroundings among college football's elite.

The Razorbacks, who look to improve to 3-0 for the first time since 2016, catapulted into the Top 25 with a dominant showing against No. 15 Texas last week.

GeorgiaSouthern arrives for a nonconference game on Saturday in Fayetteville, Ark., with a run-first -- and run-second -- mentality.

The Razorbacks were impressive against the Longhorns, grabbing a 16-0 lead at the half and pushing their advantage to 33-7 in the third quarter.

Arkansas plans to do to against Georgia Southern exactly what it did to the Longhorns: run the ball. Arkansas had 47 rushing attempts last week and produced a whopping 7.1 yards per attempt. The Razorbacks rolled up 471 yards of total offense against the Longhorns.

Arkansas is ranked among the top 20 teams in the country for the first time since September 2016.

Four Razorbacks rushed for at least 50 yards, led by running back Trelon Smith's game-high 75 yards and a touchdown on 12 carries, just ahead of quarterback KJ Jefferson, who ran for 73 yards on 10 carries, while AJ Green (seven carries, 67 yards, TD) and Raheim Sanders (eight carries, 50 yards, TD) also found plenty of room to run against Texas.

Jefferson also was an efficient 14-for-19 passing for 138 yards and an interception.

Arkansas held Texas to just 256 yards of total offense, including 138 rushing yards on 41 carries, an average of just 3.4 yards a carry.

The victory resonated for coach Sam Pittman and Razorback fans stormed the field to revel in the team's first victory over a top-15 team since 2016. But Pittman remains cautious against Georgia Southern.

"We have proven we can have success and then flush it the next week," Pittman told reporters. "South Georgia kids are tough. They're a little bit like us."

In two games this season, Arkansas has rushed for 578 yards and eight touchdowns on 91 carries for an average of 6.4 yards per attempt.

Georgia Southern, a member of the Sun Belt Conference, is coming off a 38-6 loss at Florida Atlantic in a game in which the Owls scored 38 straight points after the Eagles took a 6-0 lead after the first quarter.

Georgia Southern gave up 332 yards and four touchdowns through the air and another 197 yards on the ground against Florida Atlantic.

Georgia Southern freshman quarterback Cam Ransom was 12-for-21 passing for 98 yards and ran for 42 more. Backup quarterback Sam Kenerson added 35 yards rushing and 20 yards passing, but he also threw an interception. No other Eagles player rushed for more than 30 yards and the team's leading receiver, Khaleb Hood, had six catches for 55 yards.

The Eagles, who beat Louisiana Tech, 38-3, in the RL Carriers New Orleans Bowl last year, are looking to avoid starting 1-2 for the second time in three seasons.

The Eagles could receive a boost with the return of redshirt junior quarterback Justin Tomlin, who was suspended for the first two games because of academic issues. Tomlin, who was named the starter Saturday, threw for 161 yards with no touchdowns and three interceptions in seven games last season, in addition to rushing for 197 yards and a touchdown on 38 carries.

"I'm really disappointed with our start to the season and I feel we should be a lot better and a lot further along and we haven't played Georgia Southern football," Eagles coach Chad Lunsford told reporters. "We have to go back to the drawing board and do some soul searching. This is a great week to do it because we have a great SEC opponent in Arkansas."

SYDNEY, NSW, Australia - Australian commercial radio ad revenue has bounced back up despite ongoing lockdown restrictions across the country.Revenue ...

PORTLAND, Oregon: Dutch Bros Coffee, which began in business by selling espresso-based coffee drinks from a pushcart in the Oregon ...

BEIJING, China: Seeking to expand its influence, China is seeking to join an 11-nation Asia-Pacific free trade group, the Comprehensive ...

WASHINGTON D.C.: A senior White House advisor has said that the Biden administration is considering mandatory COVID-19 vaccinations and contact ...

CHICAGO, Illinois: The airline industry is showing signs of recovery from the COVID-19 pandemic, Boeing said on Tuesday, predicting rising ...

LOS ANGELES, California: A magnitude-4.3 earthquake struck near Carson, California on Friday night and was felt in cities throughout Southern ...

BEIJING, China: China is carrying out emergency procedures after a 6.0-magnitude earthquake struck Sichuan Province in the country's southwest, killing ...

WASHINGTON D.C.: Military aid worth $130 million, out of a $300 million package intended for Egypt, will be withheld by ...

BOISE, Idaho: Public health officials in Idaho have warned that they will need to impose an emergency-level rationing of care ...