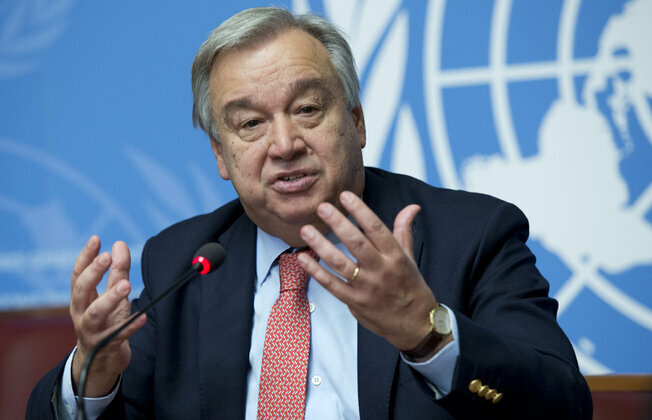 NEW YORK, 24th May, 2022 (WAM) -- At a meeting of the UN General Assembly, the 193 member states of the United Nations paid tribute to the late President of the United Arab Emirates, Sheikh Khalifa bin Zayed Al Nahyan.

In his opening remarks to the UN membership, Antonio Guterres, Secretary-General of the UN, said, "At this time of mourning, let us take inspiration from the prudence and patience His Highness demonstrated throughout his life. Let us recall his advice that preparing for the future - near or far - starts today, not tomorrow."

The meeting was chaired by the President of the 76th Session of the UN General Assembly and the Minister of Foreign Affairs of the Maldives, Abdulla Shahid, who stated, "With the late President's strategic foresight and political wisdom, complemented by a healthy ambition and genuine desire to achieve socio-economic progress, the UAE has today evolved into an aviation, finance, education, renewable energy, technology, culture, and tourism hub."

Linda Thomas-Greenfield, Permanent Representative of the United States to the UN, offered condolences in her capacity as the representative of the country hosting the UN headquarters and highlighted the close bilateral ties between the UAE and US. The representatives of Mauritania, Peru, Denmark, Oman, Czech Republic, Kuwait, Pakistan, and the Kingdom of Saudi Arabia also expressed their condolences and highlighted the achievements of the late president, including his humanitarian work, on behalf of their respective regional groups.

During the meeting, Lana Nusseibeh, Permanent Representative of the UAE to the United Nations, expressed her gratitude to those who offered their condolences to the government and people of the UAE, noting that it demonstrated the deep ties between the countries that His Highness played an outstanding role in strengthening. She said, "Sheikh Khalifa was a wise leader and a symbol of peace. He was a role model for our generation with his humility and humanity."

She added, "His achievements will serve as a foundation for generations to build upon as we continue our journey under the leadership of President His Highness Sheikh Mohamed bin Zayed Al Nahyan and the leader who will guide the UAE on its ambitious journey of development and prosperity, with the support of the rulers of the Emirates."

Prior to the meeting, the UN flag was raised to half-mast in tribute to the late UAE President, which was observed by members of the UAE delegation.