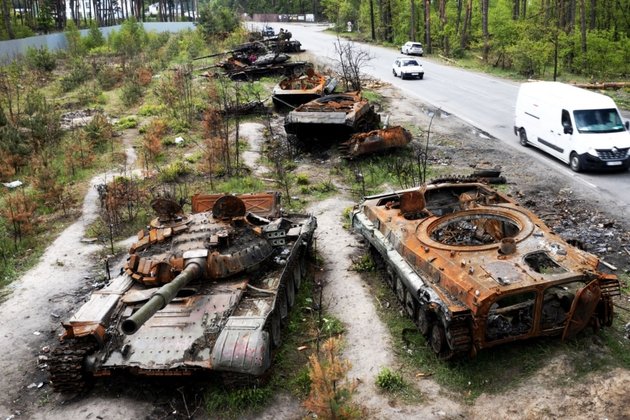 Russian forces have stepped up their assault on the eastern Ukrainian region of Luhansk as Moscow now appears focused on securing and expanding its gains in Donbas and the southern coast.

As the conflict entered its fourth month, President Volodymyr Zelenskiy warned Ukrainians that the coming period of time will be harsh, especially in the eastern Donbas region.

RFE/RL's Live Briefing gives you all of the major developments on Russia's invasion, how Kyiv is fighting back, the plight of civilians, and Western reaction. For all of RFE/RL's coverage of the war, click here.

Zelenskiy told the World Economic Forum (WEF) in Davos that Russia had carried out nearly 1,500 missile strikes and over 3,000 air strikes against Ukraine in the first three months of the war.

British intelligence said in its daily report on May 24 that Russians are seeking to encircle Severodonetsk, a city of some 100,000 people on the banks of the Siverskiy Donets river, but are also focusing their attacks on Lysychansk and Rubyzhne in the same area.

The report said that Russian forces had achieved some localized successes in the area with the aid of intense artillery fire, but Ukrainian resistance is strong and Kyiv's Joint Force Operation command structure has remained in control of this segment of the front.

Russia's capture of Severodonetsk would see the whole of the Luhansk region falling under Russian occupation, the report said.

'The coming weeks of the war will be difficult, and we must be aware of that,' Zelensky said on May 23 in his nightly address after regional leaders and residents reported heavy bombardments in the east.

'The most difficult fighting situation today is in Donbas,' Zelenskiy said, singling out the worst-hit towns of Bakhmut -- a crucial junction that serves as a command center for much of the Ukrainian war effort -- Popasna, and Severodonetsk.

The governor of Luhansk, Serhiy Hayday, said that the Russians had beefed up their forces with some 12,500 soldiers who were attempting to seize Luhansk.

Hayday said early on May 24 that Severodonetsk has suffered a lot of damage from the Russian bombardment, and at least four people were killed in the shelling of a high-rise building in the city.

If the Russians are successful and the Donbas front line moves further west, British intelligence estimated that Russian lines of communication would be overstretched and likely lead to further logistic resupply difficulties.

Photo Gallery: Photojournalist Captures Intensity Of Fighting In Eastern Ukraine AFP AFP photographer Aris Messinis captures the intensity of fighting in the Donbas as mortar shells rain down around his car. These photos were taken on May 23 as civilians tried to make their way along an important link road near Lysychansk in eastern Ukraine. Share on Facebook Share on Twitter Share on В Контакте Email to a Friend Share on LinkedIn

Zelenskiy earlier warned the WEF in Davos that slow-walking military aid was causing unnecessary deaths as Ukrainians are 'paying dearly for freedom and independence.'

He said that 87 people had been killed in a Russian attack earlier this month on a military base in Desna in the north, in what would be one of the largest single recorded strikes of the war.

Kyiv was ready for an exchange of prisoners with Russia 'even tomorrow,' Zelenskiy said, calling on his allies to put pressure on Moscow.