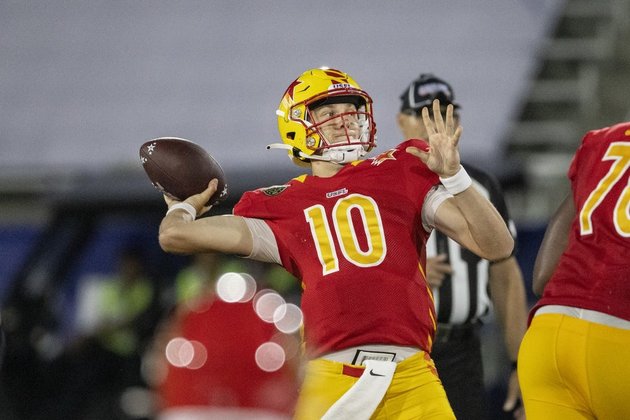 The Philadelphia Stars advanced to the USFL championship game by scoring nine points in the final six minutes -- including a clinching 87-yard punt return for a touchdown -- to defeat the New Jersey Generals 19-14 in the semifinals on Saturday in Canton, Ohio.

Trailing 14-10 in the fourth, Luis Aguilar kicked a 29-yard field goal with 5:59 remaining to get the Stars within a point. Maurice Alexander later returned a punt 87 yards for the game-winning score with 2:00 remaining.

Generals quarterback Luis Perez was intercepted with 41 seconds remaining to seal the deal. Perez threw for 191 yards but was picked off twice.

The Generals also returned a punt for a touchdown to take a 14-10 lead with 10:30 remaining in the game.

Aguilar had missed a 26-yard attempt at the outset of the fourth quarter. Stars quarterback Case Cookus threw for 133 yards and an interception, and also rushed for 39 yards and a score.

Birmingham scored on offense, defense and special teams to defeat New Orleans in the second semifinal from Canton, Ohio.

The Stallions took their first lead, 14-7, when DeMarquis Gates returned an interception 71 yards for a touchdown early in the second quarter. The Breakers drew even with 1:15 left in the half, but Victor Bolden Jr. returned the ensuing kickoff 90 yards for a score.

The teams traded second-half field goals before J'Mar Smith iced the game with a 2-yard rushing score with 45 seconds to play. Smith finished 17 of 27 for 190 yards with a touchdown and no interceptions, and he added a team-high 48 rushing yards and a score on seven carries.

New Orleans quarterback Kyle Sloter completed 22-of-40 passes for 327 yards with a touchdown and two picks. His top target was Sal Cannella, who racked up 12 catches for 154 yards.

The Stallions and Stars will play for the USFL title on July 3 in Canton.