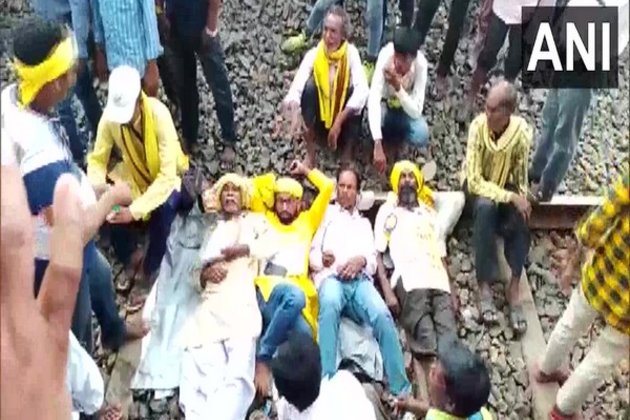 Purulia (West Bengal) [India], September 21 (ANI): People from the Kurmi community in West Bengal continued their 'Rail Roko' protest in Purulia for the second day on Wednesday over their demand for Scheduled Tribe status.

The stir that began on Tuesday has affected train services in several parts of Jharkhand, Odisha, and West Bengal as thousands of people flocked to the railway tracks of the South Eastern Railway and blocked the rail route in Kharagpur, Khemasuli, and Purulia.

Under a collaborative attempt of five different outfits of Jungle Mahal region, the protesters have demanded the intervention of the state as well as the Central government for including the Kurmali language in the Eighth Schedule to the Constitution of India and granting the status of Scheduled Tribe to the community.

Seeking fulfilment of their demands, the agitators blocked railway tracks.

Members of the community claimed that their Scheduled Tribe status was withdrawn after independence for unknown reasons, despite the fact that they were registered for the same till 1931.

Because of the Rail Roko protest of the community, the transport system in the district has almost come to a standstill.

The passengers of various long-distance trains are suffering ahead of the Rail Roko programme of the Kurmi Tribal community as they have been halted at different stations.

The South-Bihar Express train Howrah-Chakradharpur Express train is halted at the Adra junction, while Bokaro-Bardhaman Steelcity Passenger is currently at the Purulia Railway Station.

Ajit Prasad Mahat, spokesperson of Adivasi Kurmi Samaj, said that the passengers were already informed about "today's programme" of protest.

Meanwhile, bus services at Purulia-Barakar State Road No.5 were also brought to a halt.

"For many days, we have been demanding the inclusion of Kurmi caste in the Scheduled Tribes category. We want the state government to work on it soon," Indrajit Mahato, BJP MLA from Sindri had said. (ANI)

BEIJING, China: During a ceremony this week, China certified its C919 narrow-body passenger jet, which is part of the country's ...

NEW YORK, New York - It was another volatile day on Wall Street on Friday as investors weighed up more ...

Asian stocks close out month and quarter on dismal note

SYDNEY, NSW, Australia - Asian stocks closed out the month and the quarter on a dismal note Friday."The 'troubling triad' ...

With eye on competition, Tata Motors selling $10,000 EV in India

NEW DELHI, India: As it seeks to attract more buyers, Tata Motors, the country's only electric vehicle maker, has introduced ...

40,000 Chinese workers to be deported as Manila ends online gaming

MANILA, Philippines: The justice ministry in Manila said it will close 175 Chinese-owned "Philippine offshore gambling operators" and deport some ...

Abortion regardless of marital status legalized by India's top court

NEW DELHI, India: In a decision widely hailed by women's rights activists, India's top court upheld the right of a ...

Another delay for US moon rocket as hurricane approaches Florida

CAPE CANAVERAL, Florida: NASA has announced that it will roll its giant moon rocket, the Space Launch System, off its ...

MIAMI, Florida: As Hurricane Ian crashes across the Caribbean, bringing high winds and torrential rains, Florida residents are scrambling to ...

KRAKOW, Poland: Organizers said an April Roger Waters concert planned in Krakow, Poland, has been canceled due to Waters' support ...

TEL AVIV, Israel - The Israeli army has approved using drones to carry out assassinations in the West Bank.The extraordinary ...

LONDON, England: As Britain adjusts to its first new head of state in 70 years, the government printers responsible for ...