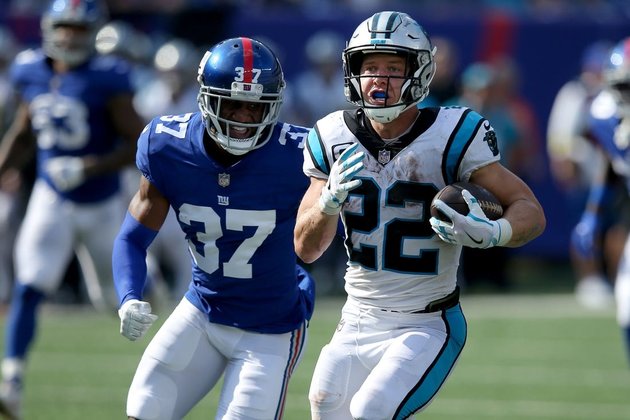 Carolina Panthers running back Christian McCaffrey was limited in practice Thursday by an ailing ankle but is expected to play Sunday against the New Orleans Saints.

McCaffrey took his scheduled day off on Wednesday, and on Thursday, his ankle was stiff. He didn't show signs of discomfort, per the team website.

McCaffrey, 26, played in just 10 of a possible 33 games over the past two seasons due to ankle and shoulder injuries. But he is dangerous when healthy and has gained 3,722 rushing yards and 3,065 receiving yards with 31 rushing touchdowns and 17 receiving scores in 60 games (54 starts) over five-plus NFL seasons.

Linebacker Frankie Luvu (shoulder) and cornerback Stantley Thomas-Oliver III (Achilles) were listed as limited participants in Thursday's practice after having no designation on Wednesday.

US 50 states agree to standardized connections at EV charging stations

WASHINGTON D.C.: The U.S. Department of Transportation has approved the electric vehicle charging station plans in all 50 American states, ...

BEIJING, China: During a ceremony this week, China certified its C919 narrow-body passenger jet, which is part of the country's ...

NEW YORK, New York - It was another volatile day on Wall Street on Friday as investors weighed up more ...

Asian stocks close out month and quarter on dismal note

SYDNEY, NSW, Australia - Asian stocks closed out the month and the quarter on a dismal note Friday."The 'troubling triad' ...

With eye on competition, Tata Motors selling $10,000 EV in India

NEW DELHI, India: As it seeks to attract more buyers, Tata Motors, the country's only electric vehicle maker, has introduced ...

US claims American-JetBlue alliance is anti-competitive

BOSTON, Massachusetts: The U.S. Justice Department has asked a Boston judge to force American Airlines and JetBlue Airways to scrap ...

Abortion regardless of marital status legalized by India's top court

NEW DELHI, India: In a decision widely hailed by women's rights activists, India's top court upheld the right of a ...

Another delay for US moon rocket as hurricane approaches Florida

CAPE CANAVERAL, Florida: NASA has announced that it will roll its giant moon rocket, the Space Launch System, off its ...

MIAMI, Florida: As Hurricane Ian crashes across the Caribbean, bringing high winds and torrential rains, Florida residents are scrambling to ...

KRAKOW, Poland: Organizers said an April Roger Waters concert planned in Krakow, Poland, has been canceled due to Waters' support ...

TEL AVIV, Israel - The Israeli army has approved using drones to carry out assassinations in the West Bank.The extraordinary ...