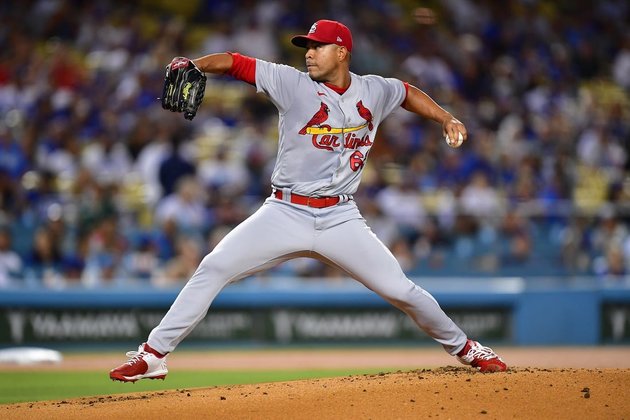 Albert Pujols made history with two home runs to reach 700 for his career and the visiting St. Louis Cardinals capped the night with a convincing 11-0 victory over the Los Angeles Dodgers on Friday.

Pujols hit a two-run homer in the third inning against left-hander Andrew Heaney and a three-run shot in the fourth against right-hander Phil Bickford as the Cardinals reduced their magic number for clinching the National League Central title to four.

St. Louis left-hander Jose Quintana (6-6) gave up five hits over 6 2/3 scoreless innings. He struck out six without issuing a walk. Quintana is 3-1 with a 2.14 ERA in 10 starts since moving to the Cardinals from the Pittsburgh Pirates at the trade deadline.

The Dodgers (104-47) lost for the third time in their past four games.

Pujols' first home run gave the Cardinals a 2-0 lead, with his historic three-run shot in the fourth made it 5-0.

The sold-out Dodger Stadium crowd gave Pujols a curtain call after the second home run. The veteran of 22 seasons hit 12 home runs as a member of the Dodgers last season.

The Cardinals scored three times in the fifth inning, getting an RBI double from Dylan Carlson and a two-run homer from Nootbaar, his 14th, for an 8-0 lead.

Yepez hit his 12th of the season in the seventh inning, and two batters later Nootbaar hit a run-scoring single for his third RBI. Burleson, pinch-hitting for Pujols, belted his first career home run in the eighth against Dodgers infielder Hanser Alberto.

Dodgers first baseman Freddie Freeman was given a rare night off, just the second time this season he was not in the starting lineup. Los Angeles has scored six runs over its past four games.