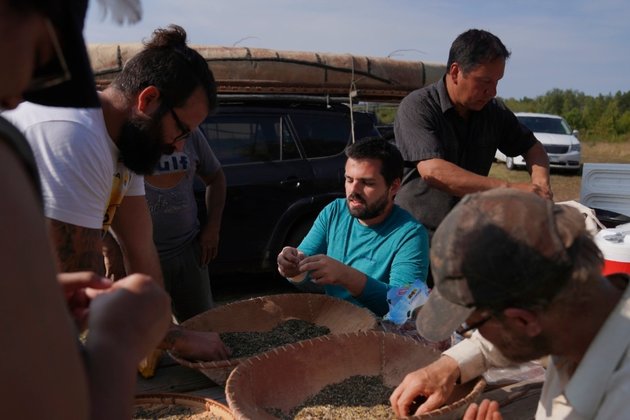 LEECH LAKE, Minnesota - Seated low in her canoe sliding through a rice bed on this vast lake, Kendra Haugen used one wooden stick to bend the stalks and another to knock the rice off, so gently the stalks sprung right back up.

On a mid-September morning, no breeze ruffled the eagle feather gifted by her grandmother that Haugen wore on a baseball cap as she tried her hand at wild rice harvesting - a sacred process for her Ojibwe people.

'A lot of reservations are struggling to keep rice beds, so it's really important to keep these as pristine as we can. ... It renews our rice beds for the future,' the 23-year-old college student said.

Wild rice, or manoomin (good seed) in Ojibwe, is sacred to Indigenous peoples in the Great Lakes region, because it's part of their creation story - and because for centuries it staved off starvation during harsh winters.

'In our origin story, we were told to go where food grew on water,' said Elaine Fleming, a Leech Lake Band of Ojibwe elder whose manoomin class at Leech Lake Tribal College went harvesting last week. 'It's our sacred food.'

But changing climate, invasive species and pollution are threatening the plant even as its cultivated sibling rises in popularity nationwide as an exceptionally nutritious food, though often priced out of reach of urban Indigenous communities.

Alvin Thunder, a Leech Lake Tribal College student in the carpentry and construction program, tosses wild rice in a birchbark basket during a process called 'winnowing,' which uses the wind to help remove the hulls from the rice before it's cooked, Sept.

Those threats make it crucial to teach young band members to harvest wild rice respecting both rituals and the environment. That will help wild rice remain available as an essential element for ceremonies, but also as a much-needed income generator for the Leech Lake reservation, where nearly 40% of Native residents live in poverty.

The basic instructions for newbies reflect that dual reality - respect the rice by not breaking the stems, and if you lose balance, jump out to avoid tipping the canoe with its precious cargo.

Fleming gave everyone tobacco from a zip-close bag. Before scattering it on the calm water and setting out, the youths gathered around another elder praying in Ojibwe - to introduce the group to the natural elements around them, explain why it needed their help, ask for safe passage on the water and give thanks.

'Any time you take something from the earth, you want to thank the earth for what she's given us,' said Kelsey Burns, a student and first-time ricer.

That reciprocity between humans and nature is essential to Ojibwe spirituality. In their stories, the Creator, before bringing to the earth Anishinaabe, the first Indigenous person, gathered all animals to ask how they could help.

'Plants were listening and chimed in and said, 'We have gifts too, so Anishinaabe can have a good life,'' Fleming explained. 'Rice said, 'We'll feed Anishinaabe.''

In two hours on the water, the pairs of polers, who stood steering with 20-foot poles, and knockers, who rained rice into the canoe until it formed a thick, green-brown carpet, gathered about 35 pounds. Experienced ricers can harvest a quarter ton a day.

This year, they can get $6 per pound of rice, a high price because the two-week harvest is particularly meager, said Ryan White. A 44-year-old single dad, he takes his two boys and a nephew ricing to help cover the bills and for the kids to buy video games.

'You learn the essence of hard work out here,' he said while knocking rice on a recent afternoon, with duct tape over his trousers' hem and shoes so not a grain would be wasted.

'Cleaning the boat real good,' White explained later as he swiped the rice into a sack. 'Because of stories we heard of old times, when ... even a handful like this meant a meal or two for the kids, and at the end of winter it actually might save your family.'

'That manoomin is our brother, that saved us as a people many different ways,' said Dave Bismarck, who was loading about 200 pounds of just-harvested rice at a nearby landing. 'Ricing to me is real spiritual. There's a lot who have gone home already, and when I'm ricing, the harder I work ... the closer I am to them.'

But the beds are 'continually shrinking,' said White, who's been ricing for three decades. And that endangers wild rice's spiritual and economic gifts.

While some natural cycling is normal, bad years for wild rice are becoming more frequent, said Ann Geisen, a wildlife lake specialist with the Minnesota Department of Natural Resources (DNR).

'It seems to be tied to climate change,' she added. 'Bigger storm events when it's uprooted and wiped out, we seem to have more of these. A big bounce (in water levels) in the spring can wipe out an entire lake.' 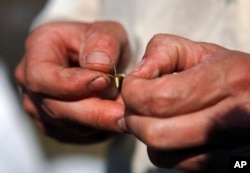 Nate Johnson pulls a piece of wild rice from its hull during the parching, or heating process, to gauge how much longer it will need to stay over the fire, Sept. 12, 2022, in Cass Lake, Minnesota.

A warming climate can also damage the plant, whose seeds need to be close to freezing on shallow lake bottoms for months to germinate well, and brings destructive invasive species and fungi to Minnesota, Wisconsin and parts of Canada, wild rice's only natural habitats.

'It's going to completely ravish natural stands,' said Jenny Kimball, a professor of agronomy and plant genetics at the University of Minnesota. She works on both conservation and developing more resistant breeds for cultivated wild rice growers, an industry she estimates adds about $58 million to the state economy and has far outpaced natural production for decades.

Most Ojibwe bands want to save natural stands, however, and several recently filed lawsuits fighting water contamination - including one dismissed this year in White Earth tribal court that named manoomin as the lead plaintiff in a novel 'rights of nature' approach.

The suit accused the state of failing to protect water where wild rice grows by allowing the pumping of billions of gallons of groundwater from an oil pipeline project.

In July, two other northern Minnesota tribes sued the U.S. Environmental Protection Agency over its approval of state changes to water quality standards that the tribes allege would increase pollution and damage wild rice. 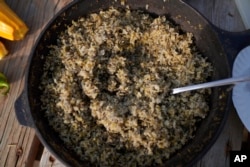 A fresh pot of hand-harvested and processed wild rice is shared by students and faculty of Leech Lake Tribal College as a part of a traditional Ojibwe ceremony, Sept. 12, 2022, in Cass Lake, Minnesota.

Leech Lake students and faculty discussed industrial pollution and controversial pipelines as they gathered outside the college for a feast celebrating their first day harvesting.

Before cooking the rice, they had to parch it, stirring it in a giant iron kettle for more than an hour; jiggle the husks loose by dancing over it as it lay in a hide-covered hole in the ground; and finally winnow it in birchbark baskets.

'We understand our responsibility, as nation, to this land. We're supposed to think seven generations to the future,' Fleming said.

Burns, the student, was thinking of her son, who's 5.

'I like learning everything that I can about our culture,' she said. 'I didn't learn much when I was younger, so I felt a part of me was missing. I want to keep teaching everything I learn.' 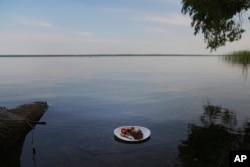 Elaine Fleming, a Leech Lake Band of Ojibwe elder, offers a plate of harvested foods, including wild rice, venison and berries all sprinkled with tobacco, to the waters of Leech Lake after a day of wild rice harvesting and processing, in Cass Lake, Minnes