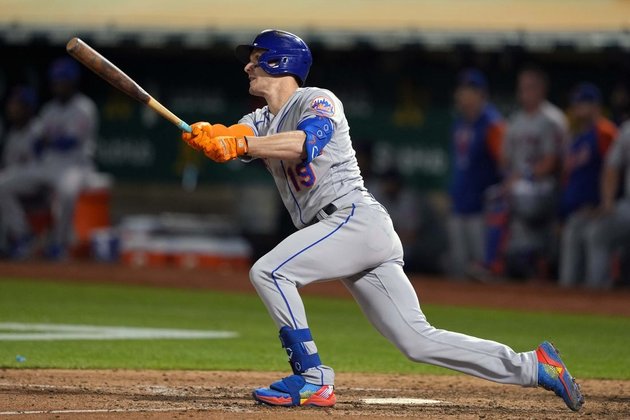 Now that Chris Bassitt has gotten the opportunity to impress his old fans with a brilliant pitching performance, the spotlight shifts to Mark Canha on Saturday afternoon when the New York Mets continue their series of San Francisco Bay Area homecomings with a second game against the host Oakland Athletics.

Pitching almost exclusively with a big lead, Bassitt breezed through eight innings in a 9-2 series-opening win Friday. He was making his first Oakland start since a six-year run there ended with his trade to the Mets in March.

Canha made the Oakland-to-New York trek four months earlier when signed a two-year, $26.5 million free agent deal with the Mets. He had played his entire career (seven years) with the A's, six seasons as Bassitt's teammate. Together, they helped Oakland make the playoffs three times.

Canha got his big bucks after hitting a career-high 17 homers and driving in 61 runs last season. He also led the American League in getting hit by pitches, as he was drilled 27 times.

It might not happen this weekend against his old friends, but Canha has taken his ball magnet to the National League this year. He leads the majors with 24 plunkings.

It could be a long weekend for the former University of California standout, who plans to lead teammates on a sightseeing tour of the antiquated Oakland Coliseum.

"You can go on top of Mount Davis, that's cool," he said of the tarped-off seats above the center field bleachers that were constructed for the Oakland Raiders. "Maybe go see Oracle (Arena) -- old Oracle," he added, making reference to the arena next door that used to be the Golden State Warriors' home.

Canha will be a stranger to several members of the new-look A's, including Saturday's scheduled starter, left-hander Ken Waldichuk (0-2, 7.13 ERA). The A's (55-96) acquired the 24-year-old when they dealt another old buddy of Canha's, Frankie Montas, to the New York Yankees last month.

Waldichuk has made four major league starts and the A's have lost all of them. He has served up 14 runs and 21 hits in 17 2/3 innings with 17 strikeouts.

He has never faced the Mets, and will be pitching in Oakland for just the second time, having limited the visiting Atlanta Braves to three runs on three hits over 5 1/3 innings in a 7-4 loss on Sept. 7.

The Mets (96-56) will take the field around the same time that the Braves (93-58) will start their game at Philadelphia. New York leads Atlanta by 2 1/2 games in the NL East.

Mets right-hander Jacob deGrom (5-2, 2.32 ERA) is tasked with trying to improve on that advantage. He has progressed from 91 to 96 to 101 pitches in his three starts this month, during which he has struck out 31 in 18 innings.

The 34-year-old veteran will be making his first-ever start against the A's, seeking to improve upon his career interleague record of just 8-10 with a 2.91 ERA.

"The kid's been great," A's manager Mark Kotsay said. "He's enthusiastic. He's got a lot of energy. You can tell he's enjoying being here, being a part of this group."