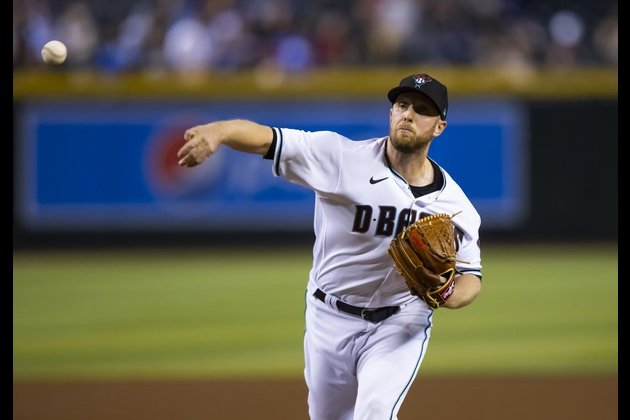 Merrill Kelly will attempt to continue his season-long domination of San Francisco hitters when the Arizona Diamondbacks face the Giants on Saturday night at Phoenix.

Kelly didn't give up a run in his last two outings against the Giants.

He gave up three hits in eight scoreless innings in a victory on July 25. Kelly allowed four hits in seven scoreless innings on Aug. 16 but he received a no-decision when Ian Kennedy served up a two-run walk-off homer to Brandon Crawford in the bottom of the ninth.

Overall, Kelly is 5-3 with a 2.56 ERA in 14 career starts against San Francisco (74-77), which has won five straight games after recording a 6-5 win in the series opener on Friday.

He was roughed up for five runs and eight hits over six innings in a loss to the Los Angeles Dodgers in his most recent turn on Monday.

The 33-year-old Kelly has pitched 182 2/3 innings and is hoping he can make three more starts and attempt to reach 200 for the first time in his career.

"It's a thing that doesn't happen as often as it used to," Kelly told reporters of the 200-inning mark. "All kinds of things, the development in bullpens, the kind of tightening of pitch counts that has happened over the last couple years, everything that goes into the analytical game that we're in now, with that kind of stuff, it doesn't really happen as much as it used to. So it would be pretty cool if I was able to get there."

But first, Kelly would like to help Arizona end its latest funk.

The Diamondbacks recovered from a 5-2 deficit on Friday but a two-out throwing error by third baseman Sergio Alcantara kept the Giants alive in the ninth inning. J.D. Davis made Arizona pay with the decisive double to left.

"This is one of those games that we've got to find a way to make plays, get the job done and execute," Diamondbacks manager Torey Lovullo said. "Doesn't matter if it's in the first inning or the ninth inning."

The Giants are playing out the string of a disappointing season but Davis, who was acquired from the New York Mets at the trading deadline, pointed out that nobody on the squad has mailed in the season.

"This team is resilient and right now we're out of it but at the same time a lot of these guys are trying to be sponges and trying to learn and trying to make those adjustments and trying to get ahead of the curve and go into the offseason with some goals or a little bit of a mission," Davis said. "And I'm one of those dudes."

Cobb, 34, has twice pitched seven shutout innings during the stretch. He received a no-decision against the Dodgers in his most recent turn when he gave up two runs and four hits over 5 1/3 innings.

Mike Yastrzemski (4-for-31, one homer) and LaMonte Wade Jr. (4-for-23, one homer) are among the Giants who struggle against Kelly.