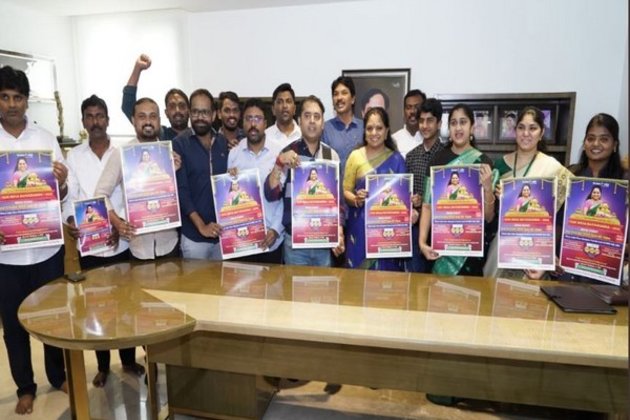 The state's unique culture Bathukamma is being showcased and celebrated in a grand manner on the world map.

Earlier today, MLC K Kavitha inaugurated the posters of Bathukamma celebrations in various countries. This year Bathukamma will be celebrated in 8 countries globally, Telangana Jagruthi will host the respective events.

She also had joined the saree gifting ceremony in Balkonda.

The Bathukamma celebrations are held throughout the ten days of Dussehra. Bathukamma means 'Goddess of Life'. Women decorate a special pot with seasonal flowers, fill the pot with offerings to the Goddess, and go on a procession in the village.

Earlier the Telangana MLC accused BJP of disturbing the communal harmony in the country and hailed the K Chandrashekhar Rao-led TRS government for its "pro-people" and "welfare-oriented" vision.

The remark came while attending the Bathukamma Saree Distribution initiative at Kammarpally, Balkonda.

"BJP is trying to divide the society and disrupt communal harmony. I want to ask BJP if they have an answer and solution for the massive inflation and unemployment today in the country. They should look at CM KCR who respects and celebrates all the religions alike in the state," Kavitha said at the event.

The Telangana MLC while addressing the large gathering of women, also urged the women to question the BJP about the state of massive price rise and unemployment.

"BJP has failed to fulfill the aspirations of the people. I would like to ask MP Aravind how many jobs the union Government provided as opposed to their tall claims. CM KCR gave over 2 lakh posts and more than a million jobs to the youth. What did the BJP give to the nation?" asked Kavitha during her address.

MLC Kavitha while comparing the state of Uttar Pradesh with that of Telangana said, "In Uttar Pradesh mere 70 lakh people among 23 crore population are getting pensions whereas, in Telangana with 4 crore population, the State Government provided around 48 lakh pensions ranging from Rs 2016 to Rs 3016."During the event, the Former MP distributed sarees under the flagship initiative of CM K Chandrashekhar Rao in a bid to promote local handloom during the festive season. She also interacted with the womenfolk who were gifted the Sarees by the state Government. (ANI)