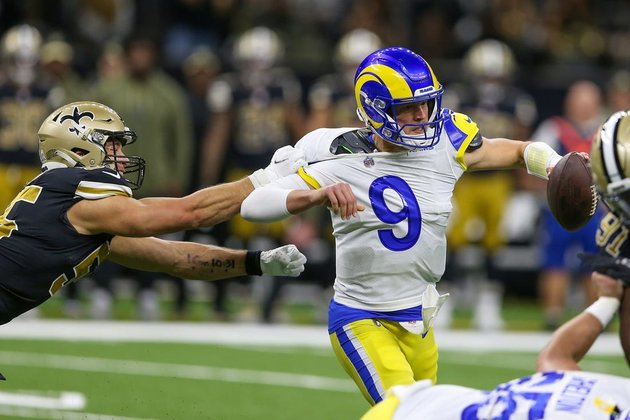 Now, those same mouths may be offering a collective yawn when pondering Sunday afternoon's game in Kansas City.

While Patrick Mahomes has the Chiefs (8-2) atop the AFC standings, the Rams (3-7) have been an unmitigated disaster. Oddsmakers weren't shy about showing the difference between the teams considering Kansas City is a whopping 14.5-point favorite at Caesars Sportsbook.

"They've had changes to the team and injuries, those things happen -- but it's not something they planned on happening," Chiefs coach Andy Reid said of the Rams.

Kansas City has been ready from the get-go this season. The team leads the NFL in average points per game (30.0) and total offense (429.3 yards), while Mahomes is atop the league in passing yards (3,265) and passing touchdowns (28).

And who could forget the teams' electric matchup nearly four years ago? Mahomes passed for a career-high 478 yards and six touchdowns in the Chiefs' 54-51 loss to the Rams.

Last Sunday, Mahomes connected on three touchdown passes to tight end Travis Kelce to lead Kansas City to a 30-27 win over the Los Angeles Chargers. Kelce had six receptions for 115 yards en route to be named the AFC Offensive Player of the Week.

Rookie Isiah Pacheco, who rolled up a season-best 107 yards last Sunday, could see even more playing time with fellow running back Clyde Edwards-Helaire placed on injured reserve with a high ankle sprain. Ronald Jones could be in line to make his season debut with the Chiefs and join Jerick McKinnon in backing up Pacheco.

Kansas City may welcome back wide receiver JuJu Smith-Schuster, who returned to practice on Wednesday for the first time since landing in the concussion protocol two weeks ago.

"Hopefully everything goes well with the protocol and stuff like that, (and) he's ready to go," Mahomes said of Smith-Schuster, who leads the team's wide receivers in both catches (46) and receiving yards (615). "To have that energy on the sideline -- he's a great player and a great teammate, and you always want to have those guys back in the huddle."

While the Chiefs have won four in a row, the reeling Rams have lost four straight games to plummet to the bottom of the NFC West. To boot, Los Angeles ranks fourth-worst in NFL in average points per game (16.8) and third-worst in total offense (288.0 yards).

"We're all professionals here," Los Angeles coach Sean McVay said. "This is our job. These are some challenging times, but you can't jump off the roller coaster. You gotta be able to stay on track."

Quarterback Bryce Perkins relieved Matthew Stafford (neck) in the Rams' 27-20 loss to the New Orleans Saints last Sunday. Stafford, who also is in concussion protocol, has been ruled out against the Chiefs.

"Bryce is gonna get the majority of the work (in practice on Wednesday), and we'll see how John (Wolford, neck) progresses throughout the week," McVay said.

The Rams rushed for a season-high 148 yards versus the Saints, with Cam Akers grinding out 61 of those. He is in line for more playing time after the Rams waived leading rusher Darrell Henderson Jr. on Tuesday.

NEW YORK, New York - U.S. stocks made tepid rises on Friday before succumbing to a wave of selling late ...

After decades of development, humanoid robots ready to be rolled out

MONTREAL, Canada: Data released this week showed that Canada's exports rose in October, mainly driven by pharmaceutical products and the ...

LONDON, England: As the governments of major economies are funding the development of green fuels to decarbonize, BP chief executive ...

NEW YORK, New York - U.S. stocks were bought up on Thursday, with all the major indices finishing with appreciable ...

WELLINGTON, New Zealand: The government of New Zealand said it will introduce a law requiring major online digital companies, such ...

WASHINGTON D.C.: The White House said the administration of President Joe Biden is considering a proposal from Republican leader Kevin ...

WASHINGTON D.C.: In a case that Supreme Court liberal justices said could empower certain businesses to discriminate based on constitutional ...

MOSCOW, Russia: Russian officials have said that some 2,500 Caspian seals have been found dead on the Caspian Sea coast ...

Indonesia to outlaw sex outside marriage

JAKARTA, Indonesia: In a legal overhaul that critics say could curb freedoms and police morality in the world's third-largest democracy, ...

Hawaii braces for eruption on Big Island of Honolulu

HONOLULU, Hawaii: Officials are concerned that a major eruption of the Mauna Loa volcano on the Big Island of Hawaii ...