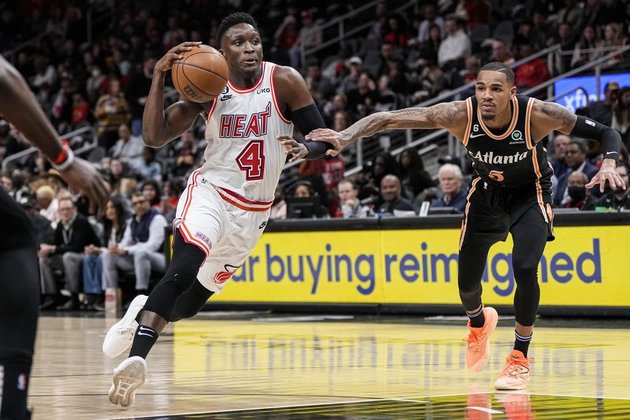 If there is a bright spot to the Miami Heat's uneven and unpredictable season, it's the play of reserve guard Victor Oladipo.

The Heat, who will host the New Orleans Pelicans on Sunday afternoon, are thrilled that Oladipo finally seems healthy. The last time he played even half a season was in 2017-18, when he was a first-time All-Star.

Since then, he has not played more than 36 games in any of the following four seasons.

However, in Miami's 115-90 loss to Dallas on Friday night, Oladipo scored a team-high 20 points making 9 of 12 shot attempts, including a pair of 3-pointers.

"Just being assertive, being aggressive, getting to the spots where I feel comfortable and trying to play at a high level," Oladipo said of his performance.

Despite the disappointing loss to Dallas, Miami is a solid 9-5 over its past 14 games. The Heat haven't lost consecutive games since dropping two straight one month ago (Dec. 20-23).

The biggest concern going forward may be the way Dallas took Heat star Jimmy Butler out of the game on Friday, double-teaming him repeatedly. That strategy could be a road map for the Pelicans and other teams against Miami.

Butler, who leads Miami in scoring (21.7 points per game), was held to 12 points against Dallas. He didn't take many shots (3 of 7) and never got in the flow.

Miami's other key players are Bam Adebayo and Tyler Herro. Adebayo is averaging 21.5 points and leads Miami in rebounding (10.1). Herro, who turned 23 on Friday, is averaging 20.6 points, 5.9 rebounds and 4.4 assists.

Meanwhile, the Pelicans have lost three straight. That includes their worst loss of the season by margin, falling to the visiting Heat 124-98 on Wednesday.

The Pelicans now get a chance at a rematch. However, New Orleans is missing its top two players -- Zion Williamson (right hamstring) and Brandon Ingram (left toe) due to injuries. When healthy, that duo combines to average 46.8 points per game.

New Orleans is 7-7 when missing both stars, and that includes a 2-6 mark in its past eight games without that pair.

Pelicans fans have voiced frustration with Williamson, who missed all of last season due to a foot injury. This season, he has played just 29 games.

The frustration over Ingram is similar as he has played just 15 games this season.

Pelicans guard CJ McCollum has picked up the slack, averaging 21.3 points and a team-high 5.8 assists. He is lethal in the mid-range game.

Defensively, the Pelicans are powered by 6-foot-8 small forward Herbert Jones and 6-foot guard Jose Alvarado. Jones leads the team with 1.5 steals per game, slightly ahead of Alvarado (1.2).

In New Orleans' 123-110 loss to the Orlando Magic on Friday, Jones returned after missing four games due to a back bruise. He finished with 10 points in 19 minutes.

McCollum led New Orleans with 23 points but made just 2 of 11 on 3-pointers.

Jonas Valanciunas added 20 points and 10 rebounds and Trey Murphy III added 18 points, although he was not pleased with the Pelicans' defense.

"We just didn't defend at a high level," Murphy said after the loss. "We also fouled too much."

At US urging, Japan to stop exporting chip technology to China

TOKYO, Japan: Japan is preparing to revise legislation to allow it to restrict the export of advanced semiconductor manufacturing equipment ...

TOKYO, Japan: Honda has announced that it will manufacture a new hydrogen fuel cell system, which was jointly developed with ...

As prices of EVs fall, manufacturer Rivian to reduce workforce by 6%

IRVINE, California: In an effort to cut costs in preparation for an industry-wide price war, electric vehicle manufacturer Rivian Automotive, ...

SANTA CLARA, California: One week after Intel forecasted lower-than-expected sales caused by a loss of market share to rivals and ...

WASHINGTON D.C.: As part of a wider policy drive to increase competition in consumer markets, President Joe Biden has announced ...

ISLAMABAD, Pakistan - Former President General (retd) Pervez Musharraf died in a Dubai hospital on Sunday at the age of ...

Up to 2,000 Israelis to be housed in new town on Gaza border

JERUSALEM - Israel on Sunday announced plans to build a new town on the Gaza border .The town, temporarily named ...

US cancels over 1,800 flights due to ice storm

CHICAGO, Illinois: After an ice storm ravaged states from Texas to West Virginia, this week, airlines canceled over 1,800 flights ...

PRAGUE, Czech Republic: Ahead of her visit to Taipei, Marketa Pekarova Adamova, Speaker of the Czech Lower House, reiterated to ...

US ending Covid emergency programs on May 11

WASHINGTON D.C.: The Biden administration said this week that it will end US COVID-19 emergency declarations on 11th May, nearly ...